“This is one of the oldest libraries in the city.  Building on what has been – the integration of the new architecture on the old building.  That’s a really important part of the library.” 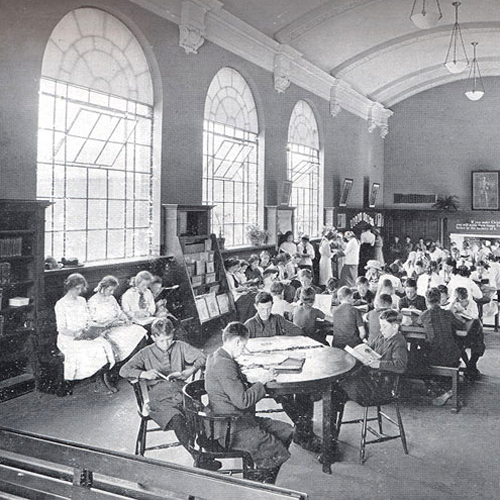 In 1911 the Toronto City Council voted to provide $60,000 (plus $5,000 for books) to the Toronto Public Library Board for a new branch library in the Dovercourt district. The Dovercourt Branch  (renamed the Bloor and Gladstone branch in 1938) officially opened October 23rd, 1913.  This library was the first Toronto Public Library branch wholly financed by the City of Toronto.  The library was closed in 1975 for renovation and expansion, and again in 2006 until 2009 for further restoration, renovation and expansion.  The current building which incorporates a beautiful glass extension onto the existing heritage building also touts the first green roof in the TPL system.

Over the past one hundred years many generations of people have come through the heavy glass door of the this library:  “I remember my first time going to the library with him [my son].  He got his first library card and first book.  Six books.”  People of all ages come to this library: “There’s a long history of me and my family here.”  Growing up with access to a library has enriched the lives of so many Toronto residents: “I remember reading the Paper Bag Princess.  When I was a kid we never went to movies.  If it wasn’t for the library I wouldn’t have seen movies.”