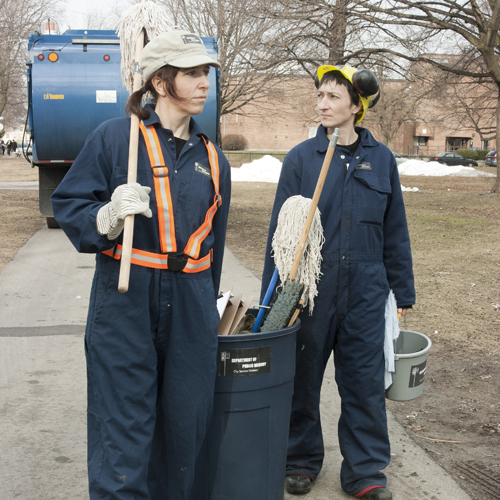 DEPARTMENT OF PUBLIC MEMORY is a two-person art collective. Our mandate is to commemorate overlooked efforts to make Toronto more socially just and liveable. We work with communities to tell stories of heroic actions and organizing by ordinary people. Working collaboratively with community members, we create street-signs, live events and installations. We first formed in June 2011 in response to the threat of widespread cuts to Toronto’s public services.

The DEPARTMENT has engaged Toronto residents in discussion about Toronto’s past and future at the 33rd Rhubarb Festival of Contemporary Performance, Mayworks Festival of Working People and the Arts, Scarborough Civic Action Network, Toronto Stop the Cuts Network, Social Planning Toronto, Toronto and York Region Labour Council, The City of Toronto Archives, 2018 Myseum Intersections Festival and in public spaces and community centres across the city.

We have presented on our work at Xpace Gallery (with Whippersnapper Gallery), Activate T.O., the Koffler Institute, Toronto Neighbourhood Centres, Sketch, East End Tenants for Social Housing, University of Toronto, York University, Artscape, the City of Toronto Archives and more.

To date we have made commemorative signs for twelve specific sites and held ten public sign unveilings. We presented an interactive event called At Work in the Memory Archives at the City of Toronto Archives in November 2017 and at the 2018 Myseum Intersections Festival. We currently have a new series of signage installed at the City of Toronto Archives until January 2019.  We have been able to make all of this happen thanks to the Canada Council for the Arts, the Ontario Arts Council, the Toronto Arts Council and countless community partners.