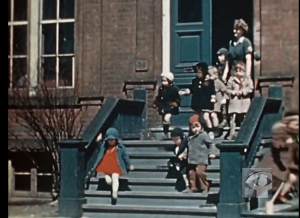 This image is a “film still” from Gudrun Parker’s 1943 National Film Board film Before They Are Six.  This 17 minute short was shot at 95 Bellevue which operated as the Bellevue Provincial Training Centre during the War.

The NFB describes this film saying “this short documentary offers an early example of the challenges faced by working mothers. As women entered the workforce in greater numbers during WWII, their young children were cared for by others. At day nurseries, trained staff supervised children’s meals, health and play. Toddlers are taught how to wash and dress themselves and to put their toys away tidily. The film is an intriguing portrait of the nascent mid-20th century world of work for women and their families”.

The DEPARTMENT chose the above image because it shows children running out of 95 Bellevue Ave into the playground under the watchful eye of one of the staff at the Bellevue Provincial Training Centre in 1943.  You can see the number 95 to the left of the door frame, and recognize the some of the brickwork on the front of the building.