“I only know it was started by a volunteer in the community centre, Lewis Pearsall, who saw a need for some computers, a place to come, get some info … a field office, a place to spend the day. He said ‘we need to get some steady funding, get some roots, so people can depend on it’.” 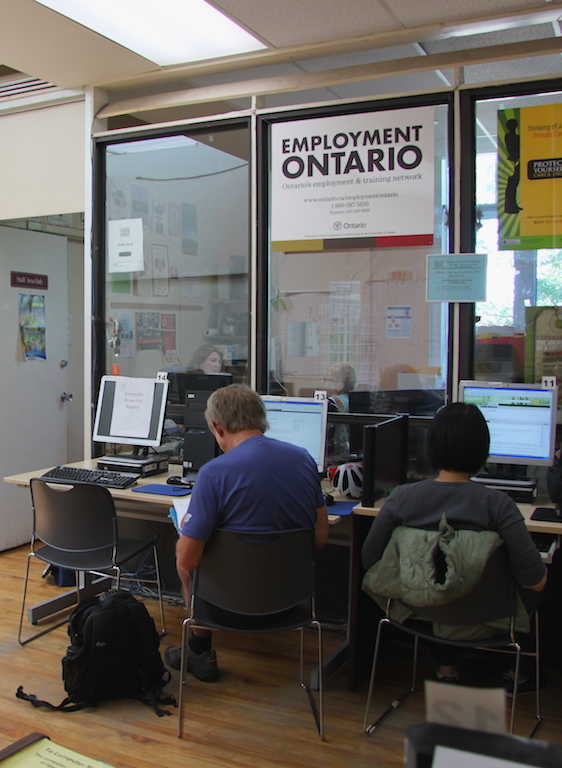 The Ralph Thornton Centre (RTC) opened the LPCRC in 1997. A long-time employee remembers: “I was here for the ribbon cutting. Can’t believe it lasted as long as it did. Every year we’d wonder ‘Are we going to get funding?’… At first it was dial-up with one computer. There was a line-up for it. Then we had some computers, some people volunteered. And HRDC said yes, you can have some funding.” Staff also remember Lewis Pearsall himself fondly. He was on the Ralph Thornton Centre board and was “always advocating for young people…a community activist.”

Before the official opening of the LPCRC the RTC had set up a few computers that youth and children could access. Former Executive Director of the RTC, Terry Lee, then sought employment funding for it. It was initially funded by HRSDC and later by Employment Ontario. Once the centre was running it underwent many small changes, according to the demands and initiatives of staff, volunteers and participants. Another former Executive Director of the RTC, Shawn Conway, told us that by “pushing the boundaries…participants made it a place where people are happy to come, where people are accommodated and make allowances for all of the eccentricities of each other.” The centre was sure to make a space for parents to park their baby carriages and always had a box of crayons on hand. People who spoke loudly were not always asked to be quiet. Over the years the users of the centre informally developed their own code for acceptable behaviour within the LPCRC.

The space that was the LPCRC also changed over the years. At first it was a very small room which held nine computers. It was “too warm in summer and cheek by jowl”.  Bit by bit, the RTC removed walls, making the centre larger and brighter. The computer equipment was upgraded and when Bob arrived to run the LPCRC in 2000 he was able to take on significant computer maintenance.

In the month before the LPCRC closed, one woman who accessed the LPCRC regularly told us: “It’s a loss of opportunity not to develop this place. Look at it again. Look at how you could reinvest in the community. It’s unique, highly specialized. We could offer everything…This is a community-driven centre.”