“I said ‘I will transform the agency if I work here. I am an unrelenting worker’. When we started the exchange it was out of a closet, essentially.” 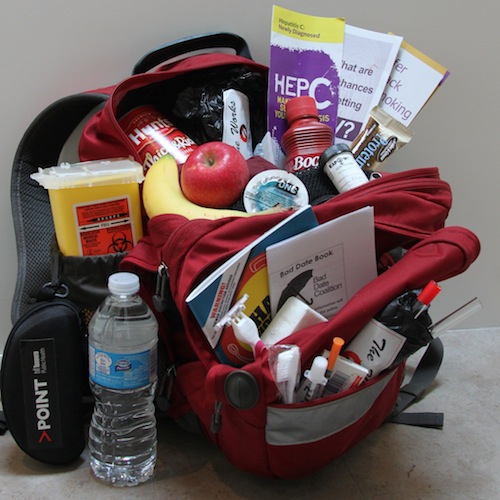 Parkdale Community Health Centre has been developing a harm reduction approach to healthcare for 25 years. In 1991, Dr. Mary Rose Macdonald and Walter Cavalieri, a newly hired social worker at Parkdale CHC, started a needle exchange at the centre. It was one of the first in the city. Shortly after that, in October 1991, Cavalieri and Carol Polych, a nursing student who was doing her placement at Parkdale, started the F.U.N. group (Finally Understanding Narcotics). It was a user-driven, user-led support group for injection drug users and it met every Monday from 6pm to 8 pm. In the F.U.N. group, people made and ate meals together, shared resources and information and discussed how drug users could be better supported in society. Despite significant opposition from local homeowners, the group successfully secured funding for a methadone clinic, which would run out of Parkdale CHC. It opened in 1993 and was the first community-based methadone program in Canada. It was taken over by Breakaway Addiction Services in 2000. In 1994, the F.U.N. group also produced the first harm reduction film in Canada. It was called “FIT”, and featured users themselves talking about safer drug use. The group marketed it internationally and it traveled the world, making waves. Staff and clients at Parkdale were also among the earliest advocates in Toronto for safer crack use. They played a key role in the Safer Crack Use Coalition and handed out pipes long before The Works began to distribute safer crack use kits.

Parkdale CHC’s proud history of harm reduction continues today. The Centre operates a Harm Reduction room, which is open Monday to Friday and is staffed by peer workers, who also do outreach in the community throughout the week. In the H.R. room, people can get safe supplies, food, water, socks, information, support, referrals and much more. The kits that are available in the room are made by volunteer Kit Makers, who meet every Monday afternoon. Every Friday, KAPOW, a support group for women-identified sex workers, meets and works together. There is also a men’s drop-in support group and HR peers run many informational workshops. Parkdale CHC is also a place to return used needles. In 2013, 85% of the needles that the Centre distributed were returned for safe disposal!