“You would have a patient just out of jail sitting next to a retired judge. It was a place of unlikely pairings. The kitchen was always buzzing.” 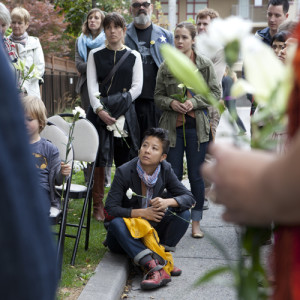 The hospice known as Perram House was housed in “Perram House” itself, a heritage home at 4 Wellesley Place, Toronto. The house was built in 1877 for Mary Perram, a widow about whom little is known. It is a stunning example of Italianate and Gothic Revival architecture. Under various owners the house operated as a hostel for immigrant women (1923-1950), a residential club for girls, an office space for the Princess Margaret Hospital, and a hospice for the dying. It housed White Light Hospice from 1988-2003. When White Light closed due to financial struggles Frank McCrea, whose late wife had volunteered at White Light, bought the building and resurrected the hospice under the name Perram House.

The philosophy of care at Perram House developed over the years as doctors, nurses and support workers who worked from a harm reduction approach worked alongside nurses who were experts in palliative care. This began during the years that the hospice known as “White Light” operated out of 4 Wellesley Place. In the early years of Perram House, the Street Nurses Network helped the hospice to become a harm reduction site. Over the years, residents gained access to medical marijuana and safe injection kits.

While the average stay at White Light had been one year to 18 months the average stay at Perram House was 21 days. This meant that residents arrived at Perram House in the more acute phases of death. If someone had been living on the streets before they came to Perram, their health might actually stabilize with the care they received. Staff focused on helping residents relax into their time at the hospice and tried to ease their fears about the dying process. They also had to convince residents (particularly those who had been ‘living rough’) to trust that they “weren’t going to do all the shoulds. We respected boundaries because they put them up. If people want to be out we respect that. It was about really allowing people to feel they had a choice.”