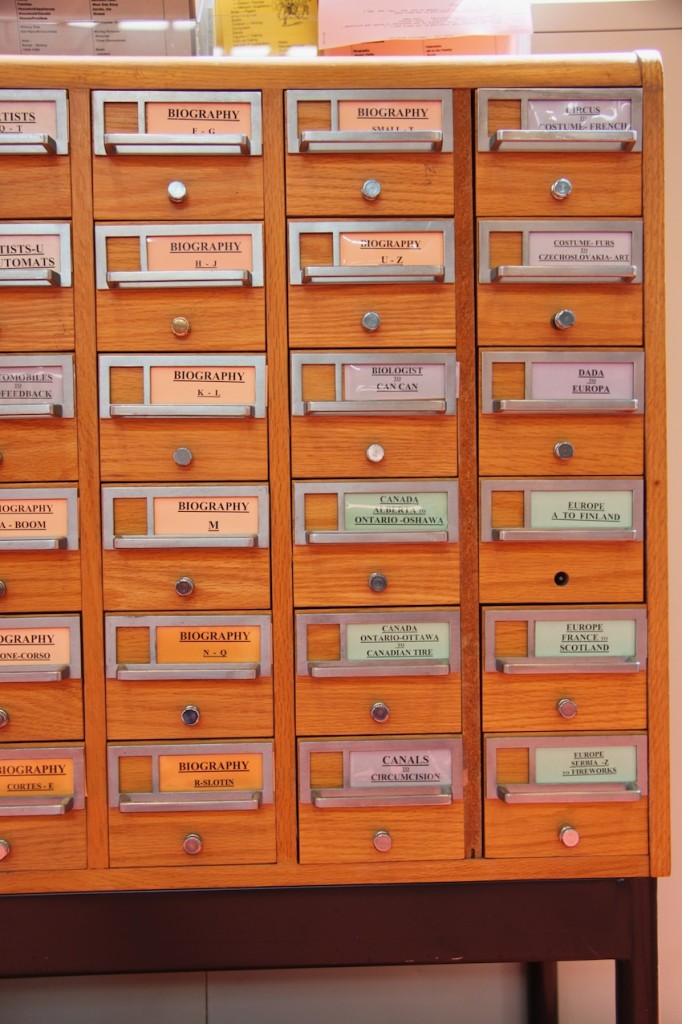 “I started working in 1981. I worked in ‘87 when they were just introducing computerized cataloguing. We had a strike – they wanted to turf us all out and hire IT. They didn’t want to train us. But we fought it and won. It wasn’t even hard to be retrained.”

People come to the TRL to do all kinds of different work.  Students and seniors share communal tables while graphic designers browse the picture collection and tutors teach in the new glass study pods.  Others come “mainly to access the computers” or because “I’m self-employed and I can spend time here.” There are also programs and workshops offered at the library: “There was an assertiveness seminar.  I don’t consider myself to be assertive, so it helped.”  Whether it’s finding an old parish record, borrowing a book on ESL or practicing on one of the two in-house pianos, people research, consult, learn and enlighten themselves through this library’s diverse collection.  This vast and peaceful space is brimming each day with “everyone focusing together.”  Of course, the staff at the TRL are also hard at work each day. In 1977 Metro Library staff answered approximately 50 000 inquiries a month. The DEPARTMENT can only imagine that number has increased as library usership continues to increase every year.

When the DEPARTMENT visited the TRL staff told us about how the absorption of the Urban Affairs Library collection into the TRL, a new cuttering (cataloguing) system and the use of security guards only during extended hours have changed their work.  Between the renovation and the cataloguing system “we are touching and moving every item in the library this year.”  Some believe that in recent years there has been a “dumbing down of the collections.” Under the guise of efficiencies, streamlining and revitalization, popular programming has taken priority over special collections: “Now librarians are expected to be generalists, but they are trained as specialists and even came to this branch to be specialists. So someone who worked 40 years with a rare collection is now supposed to be a general librarian for the Humanities and Social Science section.”