“There it is planted in the middle of the City Hall, just round the corner from the Council Chamber … If the aldermen do not improve their minds by reading … they have only themselves to blame.” 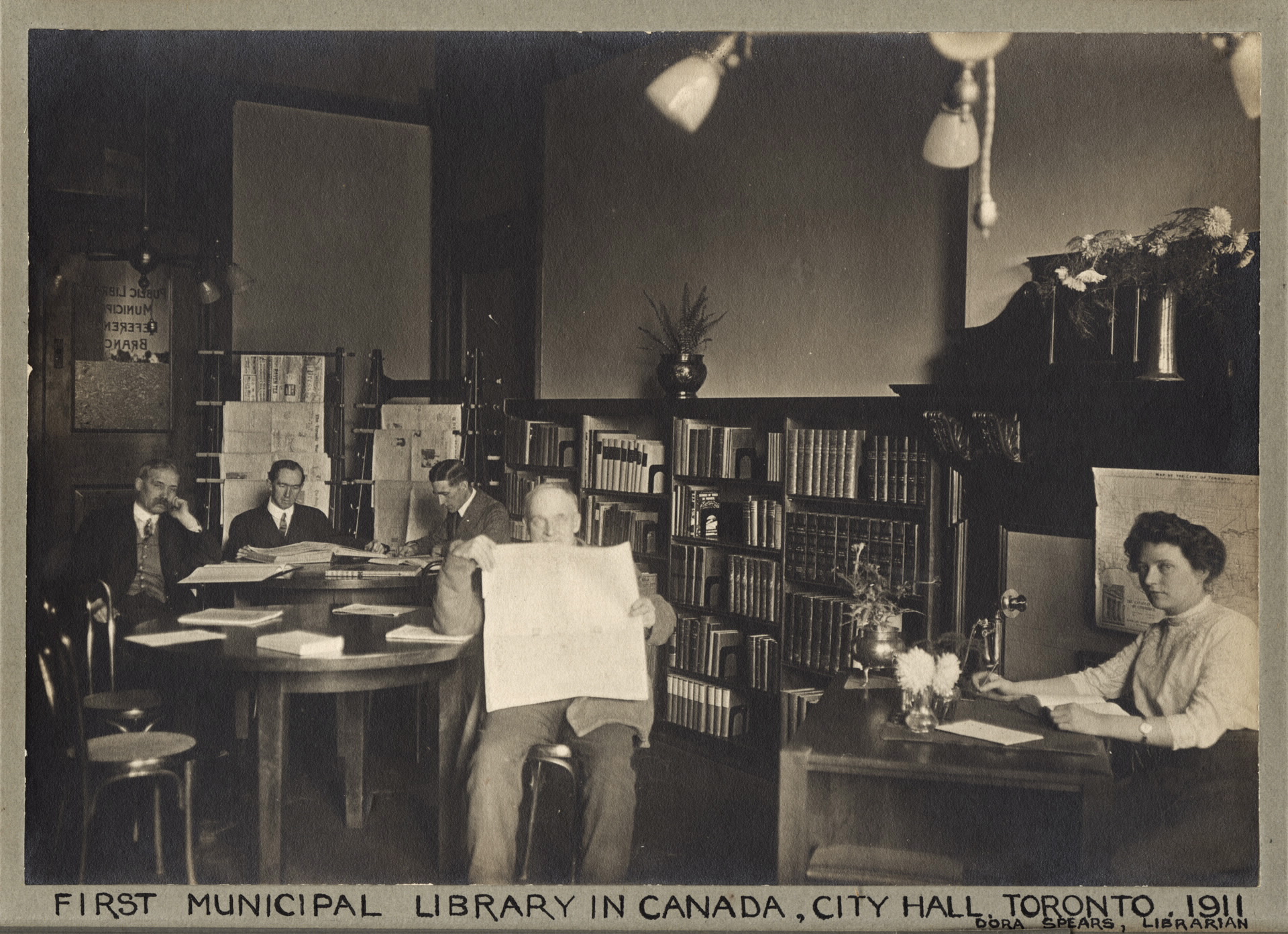 The Urban Affairs Library changed names and locations many times over its 100-year history. It opened as the “Municipal Reference Branch” on the second floor of Toronto’s City Hall (at the northeast corner of Queen and Bay Streets). The purpose of the library was to provide business leaders and city officials with specialized reference materials. The Toronto “Board of Control” (City Council’s executive committee) made a special grant of $500 to provide equipment for the library and it opened on September 11, 1911.

The Municipal Reference Branch was open six days a week (Monday through Saturday). Its first librarian was Miss Dora Spears. The library system as a whole was just beginning to use the Dewey Decimal method of cataloguing, and the branch began with approximately 1000 cards in its catalogue, which referenced books and pamphlets “bearing directly upon phases of the problems that are likely to arise in the government of a great city.”

In 1928 the Municipal Reference branch closed and its collections were transferred to the Toronto Public Library’s “Downtown Branch.” It would not reopen in a civic building until 1965. It seems that the library was missed by city leaders during this time, however. In 1946, Toronto’s mayor Robert Saunders (affectionately nicknamed “Grassroots Bob”) argued for the value of a municipal reference library that could store all reports from City departments and make them available to city staff and elected officials. “Every day of the week I have to contact some department head and ask for special information on some matter,” Saunders said. “If we had them all in one place, I would go there.”

The equivalent of the Municipal Reference branch reemerged in 1965, when Toronto’s New City Hall opened. New City Hall included a “City Hall Branch” for the public and a special “Municipal Reference Department” on the mezzanine for city staff and councillors. The branch was retrofitted in the late 1980s and then moved to the Metro Hall on John St. in 1992, at which point it was renamed the “Urban Affairs Library”. During Urban Affairs’ time at Metro Hall, the library weathered significant cuts. Premier Mike Harris’ government cut provincial operating grants by an average of 36% between 1995 and 1997 and this took a big toll on Toronto’s library system. In 1995, the Urban Affairs Library’s hours were reduced from 47.5 to 25 per week. They would not go back up again until twelve years later, when they were increased to 40 hours per week. The Urban Affairs Library remained at Metro Hall, serving city staff, researchers, planners, lawyers, poets, architects and the general public until it closed due to municipal cuts to the Toronto Public Library in September 2011.